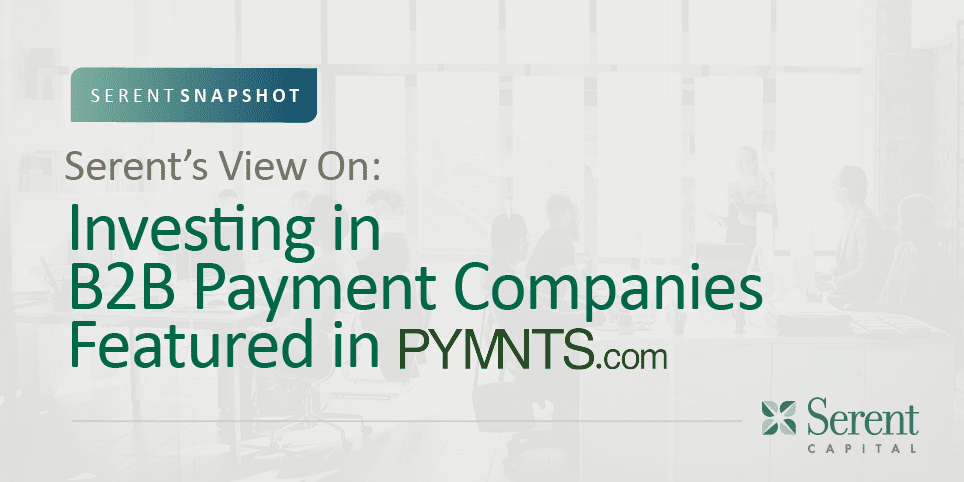 Like many venture capital companies in the payments space, Serent Capital has had a busy year.

It has closed several new deals with high-growth early-stage firms in several industries, ending the year with two major announcements. The first was the investment in early December of procure-to-pay healthcare payments company Procurement Partners. That was followed on Dec. 15 with the announcement of the launch of its fourth fund, Serent Capital IV — at $750 million.

The new fund, according to the company, Serent’s Fund IV will remain focused on “investing in successful, bootstrapped businesses where Serent’s business-building capabilities can help drive future growth.” While the B2B payments category was not the subject of its initial announcement, partner Lance Fenton told PYMNTS that he sees tremendous opportunity in the sector.

“More and more companies are starting to leverage payments technology with [virtual cards] because of the value to all players in the ecosystem,” Fenton said. “It’s typically safer and more compliant for their customers, the company can monetize the supplier spend, and the vendors in the space are also gaining new customers. One of the best things about B2B payments is it can work across verticals. We’re seeing it gain momentum in the restaurant space with Compeat, a restaurant management software company, and in the hospitality market with BirchStreet Systems, a procure-to-pay software for hotels, casinos and clubs.”

And it saw opportunity when it invested and in Procurement Partners, which uses an eProcurement platform for the healthcare industry in order to give customers an automated solution for the full purchase cycle from product selection to vendor payment. Through invoice integration, the service boasts improvements to savings and offers a compliance audit feature that can help vendors cut spending. Fenton said Serent has an advantage in understanding the healthcare vertical.

“In a company like Procurement Partners that works in a specific industry like healthcare, you need a partner that understands the industry dynamics,” he said. “The healthcare ecosystem is complex, nuanced and heavily regulated, so having an investor who understands how it all works together can be a competitive advantage. Knowing the major players, what top-notch executives are in the market and could join your team, or who to talk [to] on the partnership and integrations side helps you see around corners and allows you to craft a thoughtful and effective strategy. Now, you’re working with a ton of information and a thought-partner who has experience in [the] space and can help you jump those hurdles faster.”

That approach is typical of the Serent criteria for evaluating its investments, which Fenton breaks into three characteristics. First, he said the best investments are in companies that have “secular trends” in which they remain consistent rather than being buffeted by seasonal or cyclical events. Second, he said he sees opportunities in several verticals like healthcare as well as B2B software and services. Third, he said he likes B2B FinTechs that are quick to adopt new technologies like artificial intelligence (AI) and machine learning (ML), which have created smaller, agile companies that can quickly become sizeable competitors and disruptors

The way Fenton said he sees it, the B2B FinTech market growth over the past decade has created a rapidly expanding ecosystem of everything from tech-enabled lenders to the software and services vendors that power them. Serent’s focus has been on companies selling what he calls “picks and shovels” into FinTechs, lenders and other constituents instead of investing directly into banks and lenders. He said he believes there will be a continued trend of banks and lenders that rely on best-in-class third-party software vendors to differentiate their offerings.

“Before COVID, lenders or banks that B2B FinTech companies may work with would have several physical branches or offices,” Fenton said. “Today, most bank or lending customers expect a digital experience, which has opened up significant opportunities for B2B FinTech companies. For example, our portfolio company, GDS Link, provides credit risk management solutions to lenders. They’ve been integrating AI and ML into their product to create alternative, data-driven decision models for banks. They are working to transform decision modeling at the bank level, and with the current lending environments, they’ve been able to make huge strides. I think we’re going to continue to see massive growth and innovation within the space because of COVID.”

Read the full article at PYMNTS.com

Other News at Serent Capital

Nothing presented herein is intended to constitute investment advice, nor sales material, and no investment decision should be made based on any information provided herein. Information provided reflects Serent's views as of a particular time and are subject to change without notice. Any forward looking statements or forecasts are based on assumptions and actual results are expected to vary from any such statements or forecasts. While Serent has used reasonable efforts to obtain information from reliable sources, we make no representations or warranties as to the accuracy, reliability, or completeness of third party information presented herein. Past performance is not indicative of future results. There can be no guarantee that any investment strategy employed by Serent will be successful. A full list of portfolio holdings is available on Serent's website.